I took a trip into the trees late last night with some friends and my big brother. These trees in particular were based at Faskally Wood for The Enchanted Forest event just outside Pitlochry. We ventured out during the passing of hurricane Gonzalo with strong winds in Dundee (no fecking hurricane was going to stop me going, I can assure you.), but as we reached Pitlochry there was barely a stir in the air. I had been focusing a lot of my own will power and visualizing clear dry weather, and I reckon all of the other ticket holders had done the very same, and thankfully we got our wish 🙂

When we walked into the woods all beautifully lit up and colourful, I was instantly transported back to my youth and  recalled all those girlish dreams of magic. I felt and sounded, and most likely looked like a kid at Christmas, grinning ear to ear. The magic of the forest worked on everyone around me as all I saw before me was happiness, a lightening of the heart and a spring in the step of some of the older visitors. We had crossed an invisible threshold into the realm of youth again. Truly magical!

I only managed to capture a few photos before my phone battery died, but it’s a good thing as it ensured I enjoyed my journey through the woods by being present in the moment,  using my own eyes and not simply glancing through a camera lens. Here are some of the ones I managed to capture: 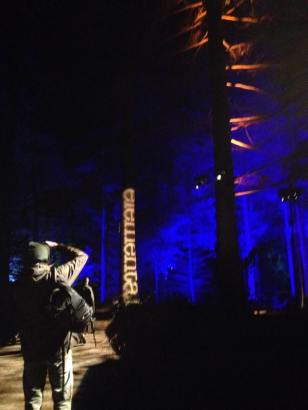 These photos are courtesy of The Sea Witch and my big brother: 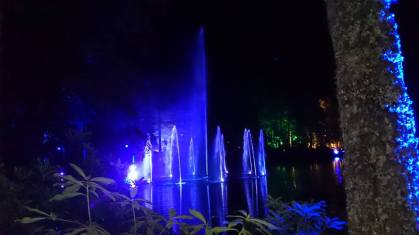 One of the acrobats 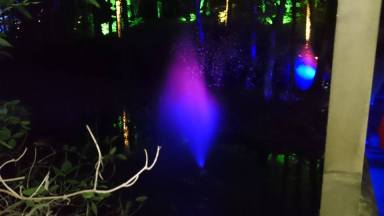 One of the water “Kelpies”. 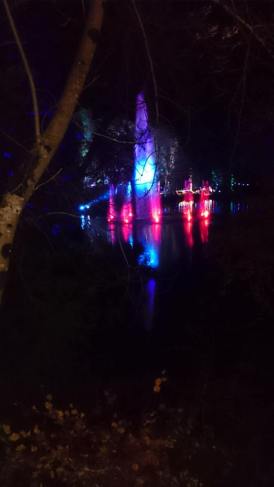 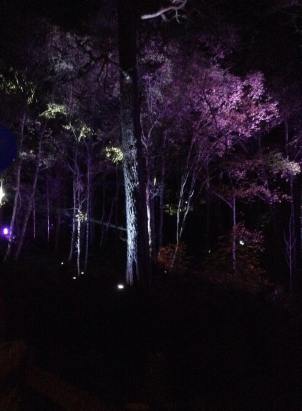 Now my first thoughts of these woods were: poor nature spirits having to put up with us humans and our mad schemes. If I were one of the genius loci I would run away and hide till the smelly humans had gone.

Second thoughts were: hmmm the genius loci are here though, I can feel it.

So overall not bad, they get a tasty treat and we get to pretend we’re part of a faery court twirling around a enchanted realm for an evening. Or at least that’s what I did anyway 😉

One of the guides, calling himself a “druid” mentioned to be careful crossing the bridge as the kelpies were well known to spray water at you for fun. I had to laugh when thinking of the folklore of the kelpie, for it will do much more than spray water at you.

We got home later than my bedtime for I had work the next day, and I crashed into bed and awoke a zombie, red eyes and crazy hair. But it was well and truly worth it.

I would definitely like to go back to the event next year and would love to visit Faskally Wood in the daytime too.

My one month of magic is… well not going to plan. I tend to have a habit of biting off more than I can chew, and silly me thought I could work in depth with sigils in a week… err no. It’s a fascinating system that’s occupying my focus just now, as I try out different methods of design and activation. I love that it can be done pretty much anywhere, friends and I have activated a few in a cafe and a pub. So that’s my focus for just now till I feel ready to move onto learning something new.

Lastly, they are a reminder that everything changes all of the time, including ourselves and that’s no bad thing 🙂

“Then a clear Companie came soon after closs,
Nicneven with her Nymphs, in number anew,
With Charms from Caitness and Chanrie in Ross,
Whose Cunning consists in casting a Clew…” 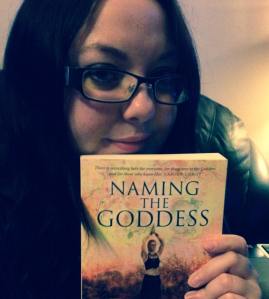 A wee bit of shameless self-promotion

Naming the Goddess is an anthology written by over eighty adherents and scholars of Goddess spirituality, merging what we historically know of Goddesses and the personal gnosis of those who practice a Goddess based path. The first part of the book examines goddess culture and archetypes and the second part is a range of essays singular goddesses ranging from Aine to Yinggara.

This book also contains my essay about “Nicnevin” a Scottish Faerie Queen and deity linked to magic and witchcraft, necromancy, spirits and the otherworld. She is the ruler of the Unseelie Court of Alba, and has similarities to other deities such as The Cailleach and even nicknamed the Scottish Hekate in the works of Sir Walter Scott.

She is a fascinating deity, and her night is soon approaching on Samhuinn Eve and I will be incorporating offerings to her on the evening.

If you get the chance to read the book, feel free to drop me a line, would love to hear from you 🙂

Well the referendum results did not go the way I hoped they would. Still on the positive side the whole experience has opened up the eyes of the people in Scotland. No more political apathy, people are giving a damn about their country and around me I see petitions being signed and people campaigning for change. It’s wonderful to see.

Autumn is finally here and it’s one of my favourite seasons. It took a little longer for the leaves to change this time around, but now there are reds, golds and coppers carpeting the ground like jewels. There are mists in the mornings and the scent of damp earth and wood smoke in the air. It makes me feel more alive and I see the change in people around me as I watch them come alive also.

Mists over the Dundee Law 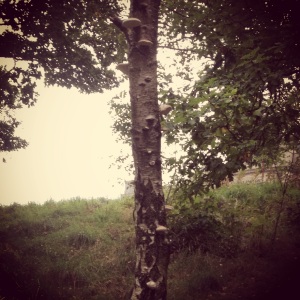 I met up with a lovely witchy friend over a pumpkin spice latte and he gave me this amazing witchy box of goodies at a time when I was feeling a bit bleh. It cheered me up immensely.

He really did spoil me with this box of wonders. Inside was a box of chocolates, the wildwood tarot wrapped in a silk scarf, a jar of hedgerow chutney, a book on hedgerow cooking and a book of Scottish witches, some dried sprigs of rosemary, a piece of high john the conqueror root, coconut incense sticks and a handmade incense holder plus an autumnal woodwick candle.

I’ve been spending a lot of evenings wrapped up cosy listening to The Pierces new album Creation, reading books with the sounds of the woodwick candle crackling like a fire in the background and filling the room with the scent of spices. Everyone needs one of these candles. Magical.

Books books and books. I’ve got a stack of books on folklore, herbalism and the occult to get through this autumn (so I can buy more!). I’ve been addicted to the new Outlander show and started reading the books, currently on book four. James Alexander Malcolm Mackenzie Fraser, mm mmm. That’s all I’m saying 😉

I was meant to be doing a beginners Scottish Gaelic class but sadly it was cancelled due to not enough numbers. Hopefully they will reschedule in February. I did some of the class last year so I know the basics, but in the mean time I will be working my way through Beag air Bheag on the BBC website, Learn Gaelic and old videos on Youtube of Speaking our Language. I’ve still got the lessons and audio clips from last year’s class so I will work my way through those too. I would love to be fluent and to do my spells and rituals in Gaelic.

I also plan to acquire more skill with knitting. So far I can cast on and do the knit stitch, but I’m not great at fixing my own mistakes or following patterns. So for now I think I will make a plain scarf with just the knit stitch. I’ve always wanted to make my own clothes. Tis the season for cosy knitwear after all.

Speaking of keeping cosy it’s been cold at the office at work so I’ve ordered these little beauties from HandsTime on Etsy so I can type and have cosy hands.

I’ve not done nearly as much foraging as I intended this year but I did manage to get some rowan berries for charm making and elderberries for chutney. Both are in the freezer at the moment until I have all the necessary ingredients available. I’ve heard frozen elderberries are easier to remove from the stalk.

As for witchery, I’ve mostly been doing spontaneous magic using whatever I have to hand at the time and the results have been very quick, as it’s fuelled by the moment. But I’ve been meaning to get studying and practising more in a structured basis, so for October I’ll be doing one month of magic. Each week I will be going over topics and expanding my knowledge and experience of them. Week one is going over sigil work and energy work. Week two will be psychometry and palmistry, week three is glamours and hedgecrossing, week four is weather work and dream incubation. I’m looking forward to recording my experiences.

Samhain is approaching and I plan to celebrate it over a three day period from 30th -1st. On the day itself I will be in Edinburgh with friends at the Samhuinn Fire Festival, I can’t wait 😀 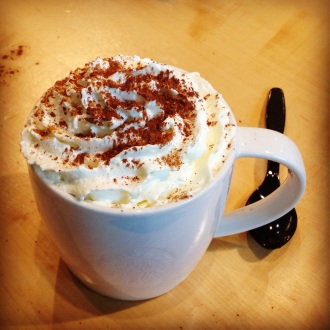 Pumpkin Spice Latte – I am so addicted to these right now. A mug of unbridled joy.

Reflections of Light and Shadow

Traditional Wicca in the American South