A couple of years ago I contributed to Naming the Goddess by Moon Books with my essay about Nicnevin. Now, for a little Samhain treat, I thought I would publish my article here for people to read. Enjoy!

“Nicnevin with her nymphes, in number anew
With charms from Caitness and Chanrie of Ross
Whose cunning consists in casting a clew”

– Alexander Montgomerie in his Flyting Betwixt Polwart and Mongomery

Nicnevin (sometimes Nicneven or Nicnevan) is a Queen of the fairies or the Queen of Elphame within Scottish Folklore. She rules the unseelie court of Alba, unusual creatures, spirits and nymphs. She is very much an otherworldly deity associated with witchcraft and necromancy and she has been connected to several other deities with similar attributes.

The use of the name was first recorded c.1585, in Montgomerie’s Flyting, and also given to a woman condemned to death for Witchcraft: Kate McNiven (Scotland: Myth, Legend & Folklore, Stuary McHardy, Luath Press 1999.)

“This name, generally given to the Queen of the Fairies, was probably bestowed upon her [Kate McNiven] on account of her crimes.” Pref. to Law’s Memor. xxviii, N. (Supplement to the Etymological Dictionary of the Scottish Language: Volume Two by John Jamieson).

Nicnevin has been conflated with the Gyre Carling, Black Annis, The Cailleach, Habetrot and has also been called the Scottish Hecate. We can infer from these connections that her domain is primarily magic, witchcraft and her role as Queen of the fairies, she connected to the realm of the dead and necromancy. She is known as a hag and giantess, however both The Cailleach and Habetrot have been known to transform into younger more beautiful versions of themselves, and it can be said Nicnevin also has the power of shape shifting into a young and beautiful form. She is a goddess who moves between the worlds,

“She has been called the Bone Mother. She is among those who take part in The Wild Hunt. Nicnevin flies through the air accompanied by flocks of honking geese, and geese are among those classed as psychopomps.” (The Weiser Field Guide to Witches, Judika Illes.)

By examining some of those she is often compared to we will gain a much better understanding of Nicnevin’s domain. To begin with there is the Gyre Carling, gyre possibly originates from the Norse gýgr meaning “ogress” and carlin/carling is used in both Scots and English and translates as “old woman”. So the Gyre Carline is understood to be a crone like figure, an ogress/giantess. The word carlin has also been used to describe a witch, a link to the supernatural. She is much maligned as a giant hag with a taste for the flesh of good Christian men as mentioned in The Flyting of Dunbar and Kennedy (1508) and the poem The Gyre Carling mentioned in the Bannatyne MS.

It is interesting to consider that the terms Nicnevin and Gyre Carlin were both used to describe a senior witch, so this may not simply be a description of cronehood, but representative of rank and power within a witch cult. As mentioned by Sir Walter Scott in Letters on Demonology and Witchcraft (1830), “After midnight the sorceress Marian

[Mother Nicneven] This was the name given to the grand Mother Witch, the very Hecate of Scottish popular superstition. Her name was bestowed, in one or two instances, upon sorceresses, who were held to resemble her by their superior skill in “Hell’s black grammar.” The Abbot, Sir Walter Scott, 1871.

Nicneven has been called the Scottish Hekate in the works of Sir Walter Scott, and he often uses the terms Nicniven and Hekate interchangeably as though they are one and the same. Scott uses these terms to describe the head of a Scottish covine (coven) of witches practising necromancy in Letter V of his Letters on Demonology and Witchcraft (1830).

Hekate is widely known as the Greek goddess of witchcraft, the crossroads, the night and she has connections to the fairy realm and realm of the dead – attributes also associated with Nicnevin so it’s not surprising she is referred to as the Scottish Hekate.

It is said Nicnevin does have a consort but no name is given, and I’ve found no historical content of this nature. It is possible that this is a modern concept to fit in with western witchcraft and of the goddess/consort duality.

In modern practice Nicnevin is believed to ride out on The Wild Hunt at Samhuinn Eve as The Queen of Elphame with her spirits and mysterious creatures, whereas others say her sacred days are 9th and 11th November. Yule or Midwinter is also said to be sacred to her. Nicnevin can be called upon for aid in otherworldly travel, communicating with spirits, protection at night, and pretty much everything within the domain of witchcraft.

I’ve found no specific places or sites sacred to her, there is a folkloric belief that one of her sacred sites is Tomnahurich Hill, on the outskirts of Inverness. However I feel as she is so closely associated with the The Cailleach, Gyre Carling and Black Annis then their sacred sites can be attributed to Nicnevin also. It is worth considering all these deities may in fact be one and the same and their names have changed throughout the duration of history. Another place of interest linked loosely to Nicnevin is Kate McNiven’s Stane which is a solitary standing stone believed to once be part of a stone circle, found at Knock of Crieff (Scotland: Myth, Legend & Folklore, Stuary McHardy, Luath Press 1999.)

From what we have examined it is apparent Nicnevin is a multi-faceted deity with a far reaching domain and yet she still exudes so much mystery, for not only is she a goddess but also a fairy queen. She is a goddess of transformation and all things in the realm of witchcraft. She is queen, she is hag, she is beauty and she is power. Her mysteries are waiting to be explored, and perhaps if you look to the skies from the safety of your home on Samhuinn Eve, you will be lucky to see the Queen of Elphame ride out with her party.

Queen of the Bad Fairies by Brian Froud. 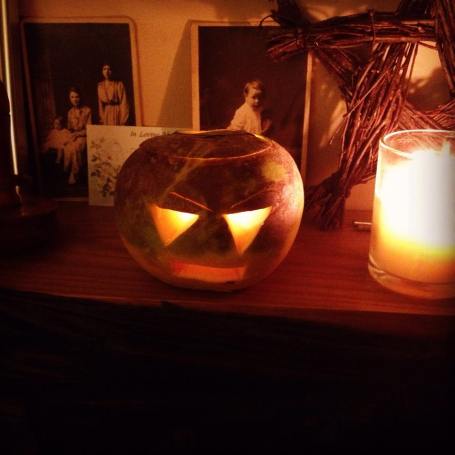 This is a time of great transition for me as Samhain approaches, I will be leaving my home of 12 years to live in an much bigger home with my beloved. So begins the nightmare of packing up!

I laid out my decorations, it’s as much of a spiritual time for me as well as a time to get fun and festive. The skull lanterns and black candles are laid out, the pumpkin banner is stretched across the fireplace and I will be baking pumpkin spice loaf and carving tumshie and pumpkin lanterns. I just might write another blog post about my Samhain revelries.

I did a brief interview with BBC Radio Scotland Out of Doors programme, the link is below, and only keeps on iplayer for 30 days. I’m working on getting a more permanent link arranged on my blog. Skip to 1 hour and 11 mins to hear me:

BBC Radio Scotland Out of Doors

In the meantime folks be good to one another, hold your loved ones close and keep cosy this season.

Reflections of Light and Shadow

Traditional Wicca in the American South