Today I dragged my lovely man out in the cold air, crunching across a frosty field to see our local Pictish stone. Known as the Balluderon stone, St Martin’s stone or Martin’s Stane this is said to be the site where a local hero avenged the death of his lover by slaying the dragon who killed her. There were nine maidens and their father who lived at Pitempton farm. He sent a daughter out to fetch water from.a well and when she didn’t return he sent another and another until all nine maidens had been sent. Martin, a young blacksmith and lover of one of the daughters found that a dragon from the well had eaten all of the maidens and he chased the dragon around Dundee.

Each of these are places names around Dundee. I have ties to Pitempton through my grandfather and great grandfather who ran Pitempton farm many years ago. So for me not only was this a fascinating link to history but also a connection to my ancestors. I took home a piece of natural quartz from the field and will set it on my ancestors altar.

Family is a big thing for me right now, with my brother passing away over a year ago and sadly more recently we lost our mother who passed away unexpectedly and hit us all hard. It’s been a very sombre Yule and New Year.  I’m taking the time to appreciate each day making more time to spend with my relatives, and acknowledging those gone before me. 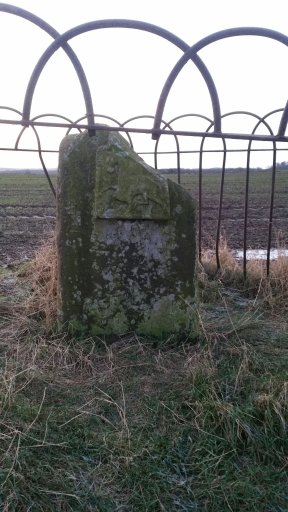 The Sidlaws, the fairy hills of Angus and Perthshire:

Finishing off the day with a beautiful sunset

This year has been a challenging one. It seems we’ve all had to face some battle and experienced some loss. It is The Dark Year as Sarah Anne Lawless put it.

My partner and I had been trying to find ways to live together. We both applied for numerous jobs so we could be together, and it was a year long struggle before we achieved it. It had been upsetting and frustrating when we thought we were stuck at square one. It was heartbreaking having to say goodbye at the end of each weekend. But finally he managed to get a job here, although that in itself was an annoyance; it took ages to finalise.

Then just before Samhain I received some bad news. My big brother had died. It was a complete shock to everyone. I hadn’t seen him in a number of years, life drifted us apart. But I always thought I’d see him again someday.  He had his demons, and he made bad choices in his life, but he was a good man with a kind heart. He never judged anyone, though plenty judged him. He had a great sense of humour and was always clowning around and making people laugh. He left behind his daughters and two grandchildren. My siblings and I are devastated beyond words.  I can’t believe we will never hear his laughter again.

His funeral service was lovely and we all gave him a great send off with a traditional Scottish bagpiper at his local church. Sometimes it takes a funeral to bring a family closer together, as terrible as that sounds it has been true in my case. My sisters and I are closer than we used to be, we’re making a better effort to communicate with each other. Now from my brother’s death I have also gained nieces. I hadn’t seen them since they were tiny children, and now they are all mostly grown up.

Then to add to the difficulty of this year, my partner and I moved into a new home and moving house is stressful enough in itself. I honestly don’t think I could have had the strength alone to see everything through. I am fortunate that I have the support of my partner, my family and my friends. They anchored me to reality.

Diary of a Folk Witch

Thoughts on spirituality; paganism; druidry; wicca and all things occult

Down The Crooked Path

Touch your soul with wild beauty

Scotland with the Wee White Dug