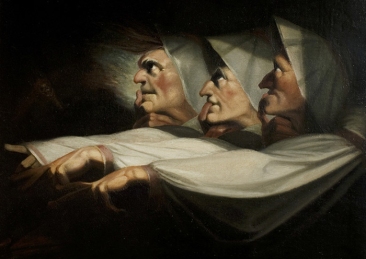 The Three Witches by Henry Fusili

Being Scottish a couple of hundred years ago was no easy task especially if you lived somewhere remote like the Highlands and Islands. Many folk struggled to make ends meet and it also resulted in more people gravitating towards cities to earn a living or moving to the lowlands where there was plenty of flat land and warmer temperatures for farming. The Highlands can be a harsh and unforgiving landscape which wasn’t always arable for farming, and long cold winters and disease could kill livestock. If one of your family became sick, you would have to travel miles before you could reach the nearest doctor.

Scottish folk were also very highly superstitious and held strong belief in the supernatural, particularly in witches, fairies, spirits and the Devil. Witches were said to steal milk, or blight crops which could in turn cause a family to starve. Fairies were known to cause illness and disease or steal away a healthy child. As seen in the Carmina Gadelica, Scottish folk would use prayers, chants and incantations when performing their day to day chores. It was essential for their survival, to protect themselves and what little they had.

When life seemed uncertain, many would perform their own divinations, or consult their local spaewife or seer. It wasn’t always about life and death situations, some people would consult methods of divination for fun or games. For serious matters they would consult one who had the gift of second sight for a more accurate reading.

Many Scots today still consult psychics, fortune tellers and mediums. My own Granny used to read palms and tea leaves. I myself use different methods of divination, and it is something that is practiced all over the world.

Listed below are some of the more traditional forms of Scottish divination.

Quarter days were Samhain, Imbolc, Beltane and Lammas (1st Nov, 1st Feb, 1st May, 1st August). These were considered the most powerful days in the Scottish year, considered to be holy. The first Monday of the Quarter, being dedicated to the Moon, was believed to share the same influences of the Quarter day itself, and was reckoned a day of good omen.

The first Monday of the Quarter day was considered the most auspicious day for making the frith. This was a form of magical horoscope akin to the frett of the Norseman. The frith was a form of divination which allowed the frithir (augurer), to see into the unseen, in order to ascertain the whereabouts and the condition of the absent or the lost, whether man or beast.

Immediately before sunrise, the augurer, fasting, his head and feet bared and his eyes closed, went to the door of the house and stood on the threshold with a hand on each jamb. He began with an incantation or a ‘prayer to the God of the Unseen to show him his quest and grant him his augury’, and then, opening his eyes, looked steadfastly in front of him.  From the nature and position of objects within sight, he divined the facts of which knowledge was sought.

The possible signs were very numerous. For instance, a man standing meant health or recovery; a man lying down meant sickness; a woman standing, some untoward event; a woman passing or returning, a fairly good sign; a woman with red hair was unlucky; a woman with black, lucky; a woman with brown, still luckier. A bird on the wing was a good omen, particularly the lark or the dove; but the crow and the raven were exceptions. A cat was good for Mackintoshes, Macphersons, Cattenachs, and all other members of Clan Chattan; a pig or a boar, though a good omen for everybody, was particularly good for Campbells; and generally the totem animal was good for all members of the clan with which is was associated.

A variation of the ceremony is recorded in South Uist. ‘The frithir, or seer, says a “Hail Mary”… and then walks deiseil or sunwards round the house, his eyes being closed till he reaches the door-sill, when he opens them and looking through a circle made of his finger and thumb, judges of the general character of the omen by the first object on which his eye has rested.

An early form of divination used in Scotland was divination by speal bone (Slinneanachd). This was a shoulder blade of  mutton (sometimes other animals) used to foretell future events. The bone must be well scraped clean and no iron must touch it. Best to boil the bone to remove all flesh according to J.G Campbell (The Gaelic Otherworld).

In Lewis divination by means of  the blade-bone of a sheep was practised in the following manner. The shoulder-blade of a black sheep was procured by the inquirer into future events, and with this he went to see some reputed seer, who held the bone lengthwise before him and in the direction of the greatest length of the island. In this position the seer began to read the bone from some marks that he saw in it, and then oracularly declared what events to individuals or families were to happen. It is not very far distant that there were a host of believers in this method of prophecy.

(The Penguin Guide to the Superstitions of Britain and Ireland, Steve Roud).

Thomas Pennant journeyed through Scotland in 1769 and recorded information about the speal bone. He states that,

When Lord Loudon was obliged to retreat before the Rebels to the Isle of Skie, a common soldier, on the very moment the battle of Culloden was decided, proclamed (sic) the victory at that distance, pretending to have discovered the event by looking through the bone

– The Lore of Scotland, A guide to Scottish Legends. Sophie Kingshill.

Halloween was seen as one of the best times to perform divination, as the commonly held view was that the veil between worlds was thin, and it was much easier to consult spirits and receive clear messages during divination. Lay folk often performed divination games on Samhain without the need to consult a seer. For some perhaps it was just a fun game to play.

Luggie Bowls is a Halloween divination game. Called luggie bowls because the bowl had a handle on either side resembling ears (lugs).

For a man if he picked a bowl of clean water he would be married to virgin, the bowl of dirty water meant married to a widow, an empty bowl meant no marriage would occur. 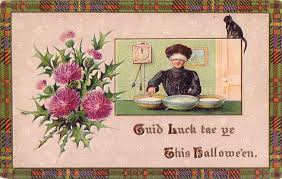 This divination was performed by unmarried people, to divine if they were destined to be with whoever they desired at the time. The person was to take two hazelnuts, one named after themself and the other named after the object of their affection. They are then placed in the embers of a fire, during which this charm is spoken:

“If you hate me spit and fly;
If you love me burn away.”

If the nuts jump from the heat then it foretells and unhappy future for the two people in question. If they burn quietly then the couple are seen as a good match for each other.

It was a tradition on the Isle of Lewis to eat salted herring on Halloween in the hopes of dreaming of a future spouse that night.

The company set off for a field where they were blindfolded and moved across as they pulled kail stalks after dark. If the stalk was crooked or straight, long or short this would be the stature of their future spouse. Sometimes a lad and lass who were courting held hands and pulled a kail stalk together. If it had plenty of good rich earth around its roots their future would be prosperous (Scottish Festivals, Shiela Livingstone).

In Shetland on Halloween, if a girl washed a man’s sark [shirt] in a burn [stream] where a funeral bier had crossed, and sang a certain song, the first to appear and grip the shirt would be her future husband.

Boys used holly for divination. They deliberately pricked their thumb with the sharp edges of the leaves and counted the drops of blood as they fell. Each drop of blood equalled a year of their lives and they would forecast when they would die.

Reading Tea Leaves and Palmistry
Although these practices did not originate in Scotland, it has been part of Scottish culture for centuries, most likely they were very popular methods used during the Victorian period.

These are just some of the methods used, some have perhaps have died out over time as Scottish people become less superstitious/religious and more secular. Some of these traditional methods may be replaced by more modern methods over time. Some methods may have already been lost to time due to lack of documentation. But the world over people still consult mediums and psychics, tarot readers and other fortune tellers. The belief of there being people who are gifted with the second sight has not changed. In fact the practice of divination is open to everyone now, anyone can purchase a tarot deck and start learning.

Did you grow up around those who told fortunes? Do you have any stories about the types of divination common to where you live? I would be interested to hear your stories. Feel free to write them in the comments below 🙂